Adventures using dictation - April Taylor on talking to herself.

As some people will know, I have arthritis in my hands. This means I can no longer write 3000 words in one sitting as I used to. It has, as you can imagine, had a significant effect on my writing life and my productivity.

Basically, I decided to switch from Apple to Windows, purely so that I could use Dragon Naturally Speaking. Since I took this decision at the beginning of the year, my writing life has been...let's say up and down!

I had used the integral dictation software in Word, Google docs etc. and some free and very cheap software packages. My experience was less than stellar and not good for my blood pressure. They may be fine for general emails, but writing an entire book. Certainly not. The decision to change took a long time and I was very conflicted by how much it was going to cost. But the time came when it was almost change or stop altogether. That was not viable. 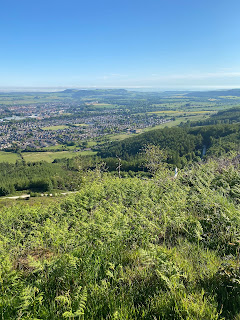 I made the change. Yes, it has been a tad bumpy at times, especially because I write historical crime, which has a whole different vocabulary, even as far as names of characters. And, now, of course, I can dictate on the move and Dragon transcribes my recordings. The landscape in which I now live has inspired the new series I am writing and when you see one photo of it, you will understand why. The freedom to stand in the midst of it and dictate what I see, hear etc. has brought a new dimension to my writing.

You can read about my journey so far here: https://authorapriltaylor.blogspot.com/2020/06/to-dictate-or-not-to-dictate-that-is.html