What did you write during the Lockdown, Mummy?

As Covid-19 races around the world, and the word Pandemic brings more than a touch of historical meaning to our doors, daily life has changed.

The UK’s version of Lockdown began 23 March, bringing with it initial food shortages due to panic-buying. But this soon gave way to a resurrection of the type of ‘Wartime Spirit’ the vast majority of the population has never experienced. People speak to one another in the street, if socially distanced, and everyone now knows their neighbours through the Thursday evening Clap for Carers.

Being in Lockdown was expected to prove a boon for members of Hornsea Writers. With no outside appointments shouldering into our writing time, words were going to flood from our fingers. It isn’t quite working out like that.

There seems to be a lot of long-postponed DIY being undertaken, but at least Madeleine McDonald emailed her publisher the typescript of her Romance before taking up a brush to paint the skirting boards. Linda Acaster hasn’t that excuse, leaving a Crime novelette and a Western to their own devices while she embarks on the sort of spring cleaning even her grandmother fought shy of.

In April Taylor’s household a sewing machine has taken prominence, no matter the two Historicals in various stages of editing, and the research for another begging to be started. The new office curtains look good though, and clothing destined for a charity shop have been given a new lease of life with some judicial cut and paste-- sorry, cut and sew.

Some of us, of course, don’t have excuses as much as priorities. All hope of writing fiction migrates to a Lost World when home schooling collides with home working and being the shopper for vulnerable relatives. Even living in a three-generational household doesn’t necessarily help. Penny Grubb caught herself making up the spare bed rather than tackle the current Crime novel, though she couldn't quite work out who she was expecting to stay.

And what is this need to bake? Throughout the country flour is a mere ghost on supermarket shelves, whereas there’s plenty of ready-made cakes and bread to be bought. Gardening has a definite pull on us all, perhaps to put a bit of space between us and those we live with, now on a 24 hour basis. Stuart Aken has retreated to his office space, not to tackle his latest Science Fiction epic but to immerse himself in learning new photographic software. He didn’t mention whether he was also baking bread, though we all agree there's something comforting about its smell.

At least one of us has got her act together on this 75th anniversary of Victory in Europe. Annie Wilkinson has already done her bit, and can sit with her tea and scones, surrounded by bunting. Enjoy your own. 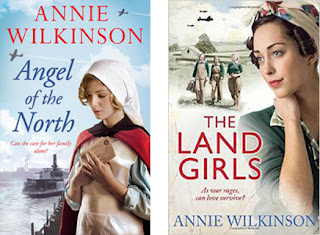