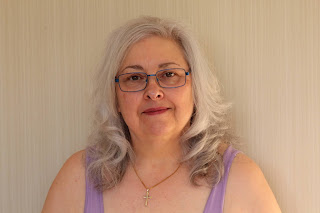 Hi, I've been a Hornsea Writer for over ten years and it was the luckiest day of my life when they decided I could join the group.

In the world of work, I'be been a librarian in various establishments, including prison and public libraries in the UK. I left my final day job, as R&D Information Manager for a global pharmaceutical company, retiring early to devote my time to writing. I now have about 14 titles published.

I was born in the heart of the English county of Lincolnshire, the location of the most dangerous revolt against Henry VIII in 1536. I've written stories since I was a small child, but at the age of 14 I caught the Tudor bug and it has never left me.

My love of history and crime, mixed with magic led to the creation of Luke Ballard, apothecary and elemancer at the Tudor Hampton Court Palace. The Tudor Enigma trilogy was published by Harlequin/Carina Press in 2014/2015.

My contemporary detective follows another of my passions, music. Georgia Pattison is an early-music soprano. She now features in two novellas and two full-length mysteries.

Three more series are in the pipeline. The Gideon Rooke Chronicles is crime fantasy set in the Wars of the Roses. The first in the series Loyalty in Conflict should be out by the end of 2020. The Shadows series is set around the time of the coronation in 1953, with its feet in WW2 SOE, the first book, Long Shadows should also be out by the end of 2020. The Mouldwarp Papers is set in the early 1970s in North Yorkshire and the first book is in the early research and preparation stage.

I have moved to live amid the stunning scenery of Redcar and Cleveland in the UK. Away from my desk, I enjoy playing the piano, singing, walking my gorgeous golden retriever and pottering in the garden.

You can find out more about me and my books here: