Launching the Last Book in a Trilogy. 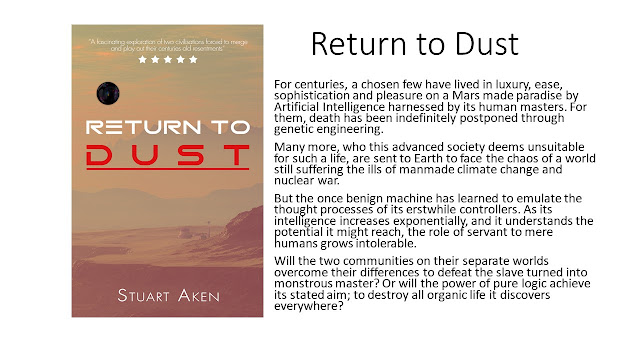 For the past three years, Hornsea Writers member, Stuart Aken, has written a novel each year for his Generation Mars series. The words ‘science fiction’ may put off some potential readers, but the series is much more about relationships and human potential; there’s even some romance in there. This year, he’s finished the trilogy with ‘Return to Dust’.

The series follows the lives, trials and triumphs of a group of selected individuals, initially called the Chosen, sent to Mars to begin a human breeding programme in the hope of preventing the specie’s extinction on Earth due to catastrophic climate change. Scientific advances, and those in the technology that follows such progress, ensure they have success in their prime purpose. But it comes at significant cost and involves many battles.


There’s social struggle here, the consequences of greed and selfishness, the injustices of gender and wealth inequality, and the rewards of truth and compassion. The first two books, Blood Red Dust and War Over Dust, are based mostly on the red planet and deal with the setting up of a colony in difficult circumstances, the expansion such opportunities inevitably provide for the wealthy and commercially acquisitive, and the conflicts that inevitably occur when the profit motive envies the idealists. This final book looks at the threat of overreliance on technology and sees the settlers returning to an Earth much changed but at least habitable. Here they face new challenges and must deal with an enemy powerful enough to threaten the existence of all life in the solar system, and maybe the entire universe; an enemy they’ve unwittingly created.


‘Return to Dust’ is due to be launched in both digital and paperback versions at the science fiction, fantasy and gaming convention, Fantasticon 2018, in Cleethorpes, on 1st and 2nd of September. Stuart Aken will be there, helping on the bookstore and signing copies of the new book. He’ll also take part in a couple of on stage discussion groups relating to writing and the creation of fictive worlds. Why not pop along and join in the fun? You can get tickets here, or just come on the day and pay on the door. As Stuart would say, ‘Enjoy!’

For more information on the series, and the author’s other work, visit his website, here.
at 17:00 No comments:

The Dummies’ Guide to WHAT!?!

For all that the Hornsea Writers number several crime writers and several How-To guide writers amongst their number, this is one title that no-one would have predicted.

That said, it is not a Hornsea Writers’ publication as such, but a member of the group, Penny Grubb, was asked to write the Foreword for this collection. As she says, she hesitated before accepting the task, afraid that an anthology devoted to female strength might be more of a worthy collection than a good read. But that concern soon evaporated. Forget worthy, and hold onto your hats. This is a collection that packs a punch from page 1.

Available now but not officially launched until the FantastiCon extravaganza in September, The Dummies Guide to Serial Killing and Other Fantastic Female Fables introduces several new authors alongside some seasoned professionals.

Sorting the Wheat from the Chaff

For the historical novelist, primary sources are always a bit like finding your way through a maze. We are, in effect, looking back and reading what we would reasonably expect to be accurate. But, of course, this isn’t always the case. The old adage says that history is written by the winners and, for the most part it is, even today. Just look at the non-reporting of some events such as demonstrations and especially the number of protesters, against the policies of a sitting government.

When it comes to the mediaeval period, primary sources are not abundant. In the first of the new Gideon Rooke series, Loyalty in Conflict, I am writing about the events in March 1470 surrounding the most obscure of the battles in the Wars of the Roses, the Battle of Empingham, sometimes called the Battle of Losecote Field. Despite spending almost a year researching this book (and being side-tracked quite a lot) it was only recently I found out the battle allegedly lasted a mere 45 minutes with Edward IV overcoming the Lincolnshire rebels led by Sir Robert Welles. This despite the king having less than 8,000 people in his army whereas Welles was leading a force of just under 15,000. 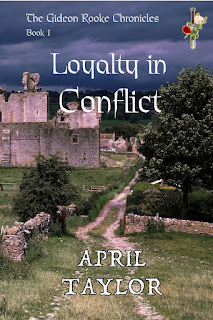 It is at times like these that reading the various sources, primary and otherwise can lead to utter confusion. More than one source says only Sir Richard Welles (Robert’s father) was beheaded whilst kneeling between the two armies, so that Robert could see Edward IV meant business. However, in the contemporary account Chronicle of the Rebellion in Lincolnshire 1470 edited in 1847 by John Gough Nichols, it clearly states that Sir Richard Welles and Sir Thomas Dymoke were both executed whilst kneeling between the two armies. Other accounts have Dymoke being executed in Stamford, but they are not written by the man on the spot at the time.

So I will go with this unnamed chronicler, who, although he is unashamedly on the king’s side and calls Edward’s traitorous brother that weak and worthless prince, George, Duke of Clarence, was there at the time. His account also tells of a servant of the worthless Duke of Clarence being found dead on the battlefield with a convenient casket of letters confirming the treachery of Clarence and the Earl of Warwick (usually known as Warwick the Kingmaker). What a convenient find.

More recent accounts throw doubt on whether the casket of letters ever existed at all and assert that it was propaganda for Edward to prove the treason of his brother and his cousin. And in the intervening 548 years, we have only to think of the Hitler Diaries, the casket letters of Mary, Queen of Scots, and the diamond necklace letter to Marie Antoinette, to know that this kind of propaganda still prevails.

The dilemma of trying to wade through thousands of words to get to the truth may at first glance be a cause of difficulty to the writer who wants to keep the history as true as possible, but it also provides that lifeblood called what-if? This is one of the most enjoyable aspects of planning a novel. The oooh moment: if he does that, I can make X do this. And, if you can cite a source that confirms your assertion, so much the better because it might just have happened the way your novel plan wants it to have happened. If it doesn’t, the answer to critics is But it’s fiction.

So, gentle reader, if I decide to accept one account and not another, you will have to accept that if my fiction meets your fact, my fiction will win.
April Taylor


You can find out more about April Taylor here: Twitter  Amazon UK  Amazon USA
at 07:00 No comments:

Email ThisBlogThis!Share to TwitterShare to FacebookShare to Pinterest
Labels: history, mediaeval, research, Wars of the Roses
Newer Posts Older Posts Home
Subscribe to: Posts (Atom)
Welcome!
Members include past winners of the CWA Debut Dagger
and the RNA New Writers' Award, as well as international competitions for short fiction, drama, and journalism.
Please see About Hornsea Writers for more information.