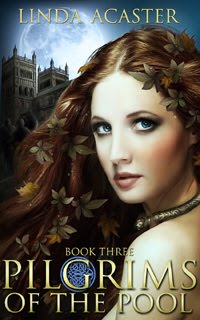 Linda Acaster has launched the final novel in her Torc of Moonlight trilogy of contemporary time-spanning thrillers. Set in university cities ringing the North York Moors it follows the resurrection of a Celtic water deity.

Too far-fetched to be taken seriously? Not a bit of it. Yorkshire has more named pre-Christian springs still in existence than anywhere in Britain. Most are cited on maps as 'Lady Well', and some carry tiny offerings tied into nearby foliage. After all, how many reading this have never tossed a coin into water for ‘good luck’? Who are you expecting to grant it?

Books 1 and 2 are set in Hull (Celtic) and York (Roman). Book 3 follows Nick Blaketon as he leaves Durham to free Alice from the Celtic deity holding her prisoner at the Pool. His route echoes that of pilgrims 900 years before who are seeking a fabled spring where an angel-woman cures all ills.

Alice is overjoyed to be reunited with Nick, but she is not the Alice he remembers. As is the land, she is transforming. His life has changed, too, and he feels caught between betrayals.

When Alice’s presence at the Pool is jeopardised by a hydraulic fracturing operation and the conservationists opposing it, Nick cannot walk away. But do the pilgrims pose a greater threat? What knowledge, handed down the generations, are the current landowners hiding?

A print edition will follow
The ebook edition of Book 1: Torc of Moonlight, is currently on offer at 99p/99c.
For more information, check out the trilogy’s website page
at 08:00

Email ThisBlogThis!Share to TwitterShare to FacebookShare to Pinterest
Labels: Book Launch, Pilgrims of the Pool Book 3, Torc of Moonlight