Of Daleks, Holograms & Hobbyists - That was FantastiCon

FantastiCon, held annually in Hull, markets itself as A doing Con not a buying Con but the goodie bags were in evidence early on as attendees hit the resident bookstore during the 19-20 November event. They took another boost when the readings started, in the first batch with authors John Scotcher, Kate Russell and Drew Wagar. The Horror anthology 666, to which members Stuart Aken and Linda Acaster contributed, sold every single paperback on offer.


FantastiCon started three years ago as a multi-book launch event by Fantastic Books Publishing which had won the licence to publish some of the original novels to the SF computer game Elite: Dangerous. The launch was such a success that the event has become a fixture  of the SF/Fantasy/Horror Con calendar.

There were SteamPunk traders, and plenty of Cosplayers of both the Marvel Comic and the Star Wars types, but there was also a very realistic Tardis and an even more realistic 'Doctor' impersonator - the accent and mannerisms were spot on - plus a phalanx of full-size Daleks, one of which forced its way through the main room tables to demand a beer from the somewhat bemused bar staff, complete with rising pitch threats to Ex-ter-min-ate when service seemed a tad reluctant.

Of course, a convention aimed at an international SF gaming community would be bare without banks of computers, and banks there were, some set-ups a little more encompassing than others. 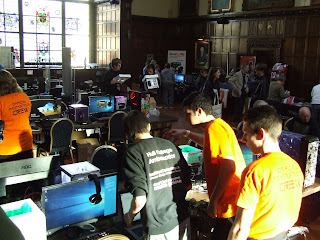 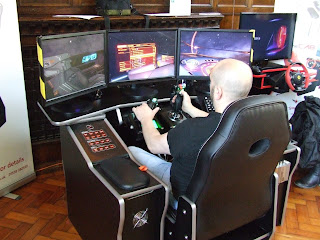 All in all, a great weekend, even for the authors. For more photos check out https://www.facebook.com/FantastiCon2016
at 08:00

Email ThisBlogThis!Share to TwitterShare to FacebookShare to Pinterest
Labels: Fantasticon