This year, the Roswell Award for short science fiction stories formed part of the Pasadena Lit-Fest, which celebrates books and authors. In previous years the award was part of a longer festival dedicated to science fiction writing, which presented one-act plays by new authors as well as adaptations of the work of established authors like Neil Gaiman and Ray Bradbury. As a result of a dispute with the actors' union Equity, the plays are missing in 2017, although the organisers hope to reinstate them in 2018.


The five finalists heard their work read to a live audience before the winner of the Roswell Award was announced. Richard Larson was presented with a cheque for $500 for his story Fifteen Minutes Hate.

The contest attracted entries from all over the world. Standing out from hundreds of other entries, Hornsea Writers member Madeleine McDonald was proud to receive an honourable mention for her short story, Not My Children, inspired by overpopulation. 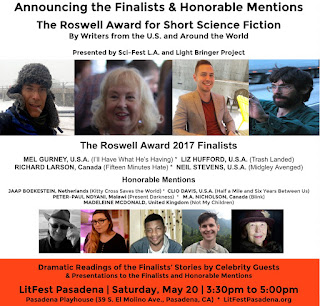