Meet more than writers at this holiday extravaganza

The annual extravaganza that is FantastiCon is scheduled for the full weekend of the 17th and 18th August in Cleethorpes at the space-age leisure centre. The focus is on a weekend packed with family activities around games, virtual reality, NERF wars, drone racing, a Mariokart tournament, an aqua assault course... and some Hornsea Writers too. 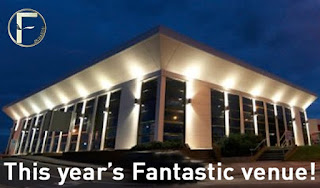 The event is used as a launch pad for new publications and previous years have seen the launch of sci-fi trilogies from Stuart Aken, crime drama from Penny Grubb and charity anthologies that have included several group members including Elaine Hemingway, Madeleine McDonald, April Taylor and Penny Grubb who all appeared in Dreaming of Steam; Linda Acaster and Stuart Aken in horror anthology 666; Stuart Aken was also invited to contribute to the fantasy and sci-fi collections, Fusion and Synthesis. Penny Grubb was featured in The Dummies’Guide to Serial Killing that was launched last year.

Several Hornsea Writers are regulars at FantastiCon. If you come along and can find a moment between activities and games, please drop by the bookstore and say hello.