How a random thought can give birth to a series. And there's music, too!

Many writers will tell you tales of how long their first book was in the making. Let's face it, writing anything between 70-120k words is not undertaken lightly, if occasionally wantonly, depending on the genre into which your magnum opus falls.

My first book began as a 'what-if?' idea during the inaugural concert of the 1978 Three Choirs Festival in Worcester. Sandra Browne was singing the part of The Angel in Elgar's The Dream of Gerontius. I was part of the chorus, this was my first Three Choirs and inclusion was by invitation only.

The Dream is a fairly regular fixture of Three Choirs and, being by local boy made good, Edward Elgar, it is very special. So special as far as Worcester is concerned that The Elgar Memorial Window is situated close to the pillar Elgar used to lean on to hear the final organ voluntary on Sunday mornings - being a Catholic, he didn't worship in the cathedral. 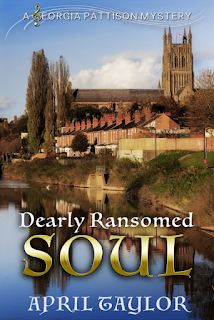 And this brings us to a very sticky point among musicians and music lovers. Should the 'G' of Gerontius be hard or soft. I know from my reading that Elgar himself always used the hard 'G'. Further research confirms that the hard 'G' was favoured by Vaughan Williams and Adrian Boult among other notable musicians. Hard 'G' it is, then.

But I digress. The book that was eventually, after a gestation period of 30 years, published by Legend Press in 2008, is Dearly Ransomed Soul and provides the first outing for Georgia Pattison. I used the what-if? idea, although for the digital version published in 2016, I changed the identity of the killer, just to add a bit of spice for the reader.

The full version of how my nosy early-music soprano came into being is here: https://authorapriltaylor.blogspot.com